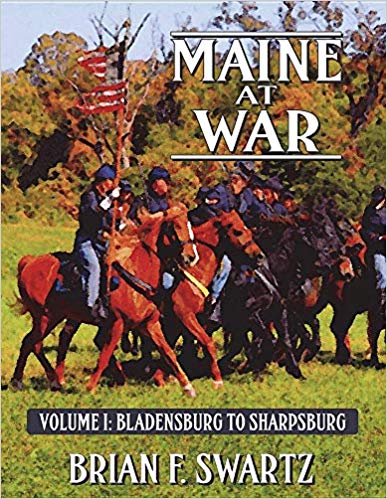 In this, the first of three volumes of Maine’s deep involvement in the American Civil War, noted author, historian, journalist, and storyteller Brian F. Swartz brings us more than just a history book. Beyond merely repeating facts from other books, in this opening volume Swartz delivers an electrifying account of Maine at war—from Cilley’s fateful duel at Bladensburg in 1838 to the explosive battle between the Rebels under Lee and the Yankees under McClellan at Sharpsburg, Maryland, in late 1862.

Swartz brings together eyewitness accounts from soldiers and nurses who were there—stories garnered from handwritten letters, articles and letters printed in newspapers of the day, and other firsthand tales.  From historical societies to state archives to libraries and beyond, and from decades of walking the actual battlefields while conducting his research, Swartz has spared no expense of time or detail to bring this powerful story to life. (Amazon)

BRIAN SWARTZ, a former writer and editor for Maine’s Bangor Daily News. While with the paper, he started a regular column and blog called Maine at War. He belongs to Richardson’s Civil War Round Table in Searsport, Maine and for the past two years has chaired the Bangor Historical Society committee that organized Drums on the Penobscot: A Civil War Experience.