All Fun and Games

In my first Witherle Words I talked about my love of gaming that grew from playing cribbage with my grandmother to playing Dungeons & Dragons and other more complicated games within the hobby. If you’ve walked by Witherle Library on a weekday and peered inside my car you might have seen the two large boxes full of board games which I take with me wherever I go. Despite having games at the ready, I never seem to be able to play as often as I would like. You could say I have a healthy obsession.

My gaming collection includes standard chess and cribbage boards as well as award-winning games, Settlers of Catan (see also Star Trek Catan) and Carcassonne. It ranges in difficulty from the simple like Skip Bo to the complex like Betrayal at House on the Hill and the Marvel deck-building game Legendary. Over the summer we hosted weekly programming for what many would consider the classic example of a deck-building game, Magic the Gathering, and by the time this is published we will have had our first meeting of the new Witherle Dungeons & Dragons group.

Games can bring people together, like the cooperative Legendary, or (temporarily) tear friendships apart, see Monopoly or Catan (though I have the weird distinction that Catan actually made me less competitive and made me enjoy games more in the moment). You have party games like Apples to Apples and Cards Against Humanity to your classic Trivial Pursuit (which now has a different version for practically every franchise you can think of from Disney to Star Wars). Crowds would gather around for hours while chess masters played. Nowadays viewers flock to YouTube channels and Twitch streams to watch people play board games and tabletop role-playing games. Poker tournaments are nationally televised and there are entire conventions that are just about gaming, tabletop and video games alike.

We are in the middle of a tabletop gaming renaissance, where new board games come out every year, from your everyday family games like Uno to the games that only those that have fully immersed themselves in the hobby would know like Twilight Imperium. Crowdsourcing sites like Kickstarter, which asks people to back projects in exchange for exclusive perks that won’t be available to customers on the open market, constantly bring in millions of dollars for game designers to release new games or gaming related accessories. I recently backed a Kickstarter for a tabletop rpg based off the animated show Avatar: The Last Airbender that earned over $10 million by the time it had completed.

We have games with mechanics that range from “draw a card and move” to multi-mechanic games which can go for half a day at minimum (make sure hydration and sustenance is at the ready). So, what draws us from the childhood simplicity of Candyland or Chutes and Ladders to games like Catan and Dungeons & Dragons? Does competition or cooperation draw (pun intended) you to a game? Is it about fun, family, desire to destroy your enemies, or all of the above? I will admit while I love competitive games like Catan, the cooperative aspects of games like Legendary or Castle Panic draw me in more these days because not only do they present a situation where you are working with and not against the other people at the table, they have a spark of strategy as you work against the board itself and not each other.

Fans of naval fiction have a treat in store for them.

Direct from south coast of England, Witherle Memorial Library and the Friend Memorial Library will present a Zoom chat with Chris Durbin, the British author of the Holbrooke & Carlisle naval adventure series that has generated interest among a cadre of local readers.

Durbin’s novels follow the careers of Edward Carlisle, a native of Williamsburg, Virginia, and his protégé George Holbrooke of Wickham, Hampshire, as they navigate the political and professional storms of the period between the Seven Years War through to the War of American Independence. The events of those years challenge the naval skills of the two heroes, as well as their loyalties as tensions grow between Great Britain and her American colonies.

His novels have been compared favorably with those of Patrick O’Brien, long the gold standard for naval fiction. They have the attributes of appealing characters, spot-on historical accuracy and detailed accounts of seamanship.

A native of southern Wales, Durbin Chris spent twenty-four years as a warfare officer in the Royal Navy, serving in all classes of ship from aircraft carriers through destroyers and frigates to the smallest minesweepers. He took part in operational campaigns in the Falkland Islands, the Middle East and the Adriatic. As a personnel exchange officer, he spent two years teaching tactics at a US Navy training center in San Diego.

On his retirement from the Royal Navy, Chris joined a large American company and spent eighteen years in the aerospace, defense and security industry, including two years on the design team for the Queen Elizabeth class aircraft carriers. He still sails from Chichester Harbour with his wife Lucia (US Navy, Ret.) aboard their Cornish Shrimper 21.

With a life-long relationship with the sea, Durbin has a boatload of sea stories that, we hope, he will share during the Zoom session which will take place at noon on Wednesday, Oct. 20. Durbin will visit the library remotely from his home in England.

Castine resident Bill Eisenhardt will moderate the conversation.  Participants can join the Zoom discussion in person at the library’s Reading Room in Castine and Friend Memorial Library’s Exhibit Room in Brooklin or on their home computer. 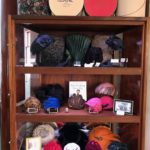 The library has a new domain for both its website and supporting emails.